Home / World / US and coalition partners together to IS Approach 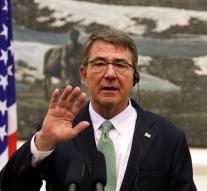 - The US has 34 countries that are part of the coalition fighting against Islamic State (IS) were invited to discuss the military campaign against IS. NATO also been invited to the meeting, which will take place on July 20. Reported that the Pentagon.

US Secretary of Defense Ashton Carter will work with colleagues from other countries tackling IS further. It is the second time held such a meeting. Which takes place at the Air Force Base Joint Base Andrews, on the southeastern edge of the US capital Washington.