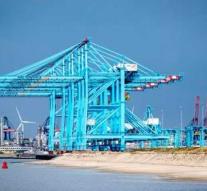 washington - The United States is also holding Russia responsible for an attack with the NotPetya grazing software. According to the White House, the cyber attack was meant to destabilize Ukraine. A government spokeswoman called the use of the hostile software 'reckless' and gave the Kremlin 'international consequences' in prospect.

Britain pointed Thursday Thursday with an accusing finger to Russia. The White House wanted at the same time as London to come with a statement about NotPetya, insiders say. However, the bloody shooting at a school in Florida caused delays.

NotPetya, also often called Petya, spread through a Ukrainian accounting program. Computer systems have been shut down all over the world. The grabbing software laid down a container terminal in Rotterdam last year. Russia denies being responsible for this.