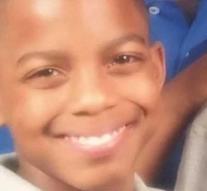 austin - A Texas lawyer found a white policeman guilty of murdering a black teenager in a car in a suburb of Dallas in 2017. The incident sparked off the discussion in the US about racist police brutality last year.

The 38-year-old agent Roy Oliver had been kicked out of action by the Balch Springs police several days after shooting deadly fifteen-year-old Jordan Edwards. The condemnation of an agent for the shooting of an unarmed citizen is rare in the US. The agent can get a lifetime.