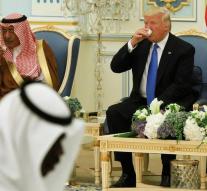 The defense equipment must increase the security of the United States loyal ally against, among other things, 'the threat of Iran. 'The agreement confirms the good relationship between the US and the Gulf States, the US says. In other areas, such as oil production, US companies have concluded contracts with Saudi Arabia.