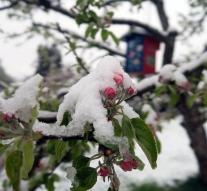 amsterdam - The average temperature in April was lower than the month before. Where the rare soft March of March increased the mercury to 8.6 degrees, it was only 8.5 degrees in April, reports Weeronline Friday.

Usually, in April, it is 2 degrees warmer than in March, 9.2 to 7.2 degrees. It is only the eighth time in over a hundred years that this has occurred. The last time was twenty years ago, in 1997.

In average, air is warming up in April, but last month it happened. At the end of March, Mercury still recorded record temperatures of 24 degrees, and the first half of April also went hotter than usual.

Around Easter, the carpet came in. The temperature was barely over 10 degrees. Despite the cold, the sun did speak well. In April, it showed an average of ten hours over average. The amount of precipitation was 26 mm below the long-term average of 44.