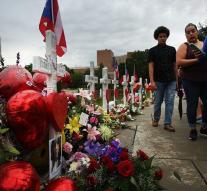 - Demonstrators and have an impatient motorist disrupted the funerals of two victims of the massacre in a gay club in Orlando. So two policemen were injured when a driver in Kissimmee (Florida) tried to drive through the funeral procession.

The driver hit his car with two policemen on motorbikes. Both officers were taken to hospital. Their condition is stable, said a police spokeswoman.

The funeral of another victim went grim. At the service in Orlando surfaced members of the controversial Westboro Baptist Church, who argued earlier on Twitter that shooter Omar Mateen,, has been sent by God. '


The relatives of the victim have probably little noticed by the presence of the demonstrators. They were invisible to those present at the funeral with the arrival of two hundred against demonstrators.