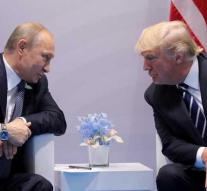 washington - The cracked argument between the US and Russia is the worst fear.

'Get ready Russia, because they (the rockets) will come, beautiful, new and smart,' so tweeted President Trump in the early morning.

The war language was addressed to the Russian ambassador in Lebanon, who had said that Russia would shoot the American missiles out of the blue. The Syrians do not wait for the weaponry. Their fighter planes have flown to Latakia where the air force base is under the cover of the Russians.