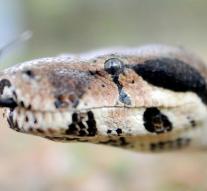 duiven - The one-and-a-half-meter worm hanger escaped last week from a house on the Vethstraat in Duiven. The boa constrictor was found in the owner's house again, police reported Wednesday.

The snake escaped in the night of Saturday on Sunday. Although the police police did not pose a danger to people, the escape led to much unrest in the Gelderse place.

After finding the owner, the owner immediately contacted the police. He has promised to keep the snake safe indoors.