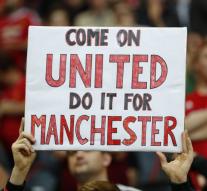 - Manchester City and Manchester United together have donated 1 million pounds (more than 1.1 million euros) to the emergency fund for victims of the terrorist attack in Manchester. That said director Ed Woodward of United Thursday against the BBC.

The fund has been set up for financial support for victims and survivors of the bombing after the Ariana Grande concert in the Manchester Arena, involving 22 deaths and 64 injured.

'It is true that we give a joint answer to this tragedy,' said Woodward. United and City are rival clubs in the Premier League. ManUnited won the Europa League in Stockholm on Wednesday evening by defeating in the final Ajax with 2-0.