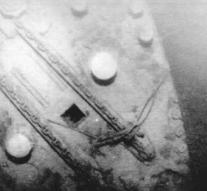 melbourne - The label measuring no more than a few square centimeters, and the recipient is virtually unknown Jack Philips. Still, this gem will yield soon converted at least 14,000 euros at the Australian auction Moss Green. The label was in fact a packet that was addressed to the wireless operator on the Titanic.

The label is stamped held on April 11, 1912, four days before the sinking of the ship. The 25-year-old radio operator Jack Philips sent to the last minute SOS messages to the world. He drowned and was one of the 1503 victims.

Called memorabilia from the Titanic, the remains of the ship are avidly collected. The dingy label contains a stamp of 'sixpence'. The conscious package was sent from Chelmsford to the White Star Line in Southampton, the shipping company of the Titanic. It would be someone from the sister ship Olympic in New York will be handed over to Philips. It probably contained empty telegram forms.

The label was for many years owned by a private collector.