Home / World / UNICEF worried about using children as a bomb 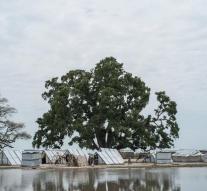 abuja - UNICEF is extremely concerned about the increasing use of children as a human bomb in northeastern Nigeria. The number of suicide bombings is four times higher this year than in 2016. The United Nations Children's Rights Organization in 2017 had 83 cases of children as a bomb.

This kind of 'atrocities' is attributed to Boko Haram's terrorist organization. UNICEF speaks of a 'horrific increase in cruel and computational use' of children. In the 83 registered cases, a girl was used 55 times. Once upon a time even a girl was used as a bomb wearing a baby on her back.

Nigerian society mistrust children abducted and later evacuated. Often they are rejected by their old environment, which makes their situation more compassionate, according to the UN organization. In the northeast of the African country there are huge problems with displacement and malnutrition. An estimated 1.7 million people were killed.