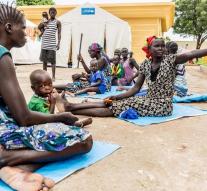 - To estimates by the UN children's organization UNICEF die in 2030 69 million children under five from preventable causes. In addition, UNICEF mounts over 167 million children living in poverty and 750 million girls marry under duress. In total, 124 million children do not attend school.

The area that will be hit hardest, is the area south of the Sahara. Live there in 2030, nine years out of ten children in extreme poverty.

Unicef ​​calls to reverse governments, businesses and organizations in the tide. The organization warns that there is no end will not be seriously addressed poverty and climate change.


In 2015, the United Nations formulated seventeen sustainable development goals to be achieved by 2030. Especially in Africa which are unlikely to be achieved.