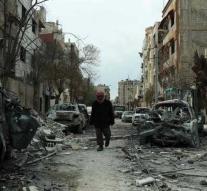 geneva - An auxiliary convoy with supplies for 180,000 people could go Sunday to the Syrian city of Douma in the besieged enclave of East Ghouta. That said the Middle East director of UN children's organization UNICEF Friday.

Director Geert Cappelaere said at a press conference in Geneva that the Syrian government might give permission. At the same time, there are no signs of agreement about further convoys to help the rest of the estimated 400,000 people in the enclave. There is also no agreement about an evacuation for about a thousand people in urgent medical need.