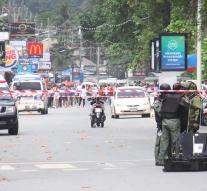 bangkok - On the tourist island of Phuket, in the popular seaside town of Hua Hin in Thailand on Sunday found unexploded bombs, three in total. According to The Bangkok Post is probably related to the bombings that claimed four lives in total last week and dozens injured tourists, including four Dutch.

Like the bombs exploded indeed constituted cell phones part of the igniter. The poltiie suspect that the bombs found did not function properly.

The investigation into the attacks is still in full swing. Police are looking for the perpetrators in circles,, local saboteurs '' and not by international terrorist organizations. Some suspects have been arrested, but the facts is still much uncertainty.