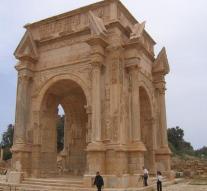 - UNESCO fears the worst for the five sites in Libya, which belong to the world. The organization called the North African country Thursday during the congress in Istanbul extremely unstable. Armed militias are located in or near areas with great cultural and historical value.

Several monuments have already suffered from the war, the fear that damaged much longer is real. Under the Libyan heritage includes the Greek settlement of Cyrene, the Roman city of Leptis Magna and the ancient oasis town of Ghadamis, the 'Pearl of the Desert '. The commission said Tuesday all its deep concern over the devastation in Syria.

Rages in Libya since the fall of Muammar Gaddafi civil war in 2011. Terrorists Islamic State control part of the country.