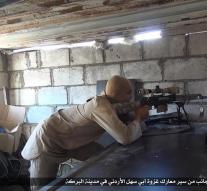 london - Terror Islamic State Movement (ISIS) has been able to arm themselves well by poorly regulated arms trade. That raises human rights organization Amnesty International in a report published Tuesday on the ISIS arsenal. The movement has arms in hands that are produced, inter alia, in Belgium, Germany and the United States.

Researcher Patrick Wilcken Amnesty says that,null, reckless arms trade is fueling atrocities ''.,null, Poor regulation and the lack of IS and other armed groups has given unprecedented firepower to monitor the massive flow of arms to Iraq in the last few decades. ''IS has received weapons in the hands of the Iraqi army during the advance of the movement in June last year. This concerns above all American-made weapons that were given to the army after the US invasion of Iraq in 2003 or sold. IS has also weapons from Russia, China and former Soviet states.Have in the seventies and eighties in particular Russia, France and China billions of dollars in military equipment shipped to Iraq. In total there were 34 countries involved in arms ammunition trade, says Amnesty. That while the country at that time was in a bloody war with Iran.Between 2003 and 2007 have transferred the US and its allies in Iraq, more than one million firearms and millions of bullets to the Iraqi army, although the armed forces poorly organized, corrupt and poorly disciplined. Amnesty caused a flourishing illicit arms market. Many of the weapons are in that period 'disappeared'.