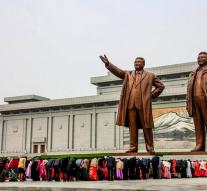 peking - In northern Korea a light earthquake occurred on Saturday. The shock had a force of 3.4. The opinions about the cause vary.

The quake occurred at 10:30 (Dutch time) and was registered at a depth of no more kilometers.

According to Chinese earthquake experts, the shock seemed to be a 'suspicious explosion,' according to the Chinese state-owned bureau Xinhua.

The meteorological institute of South Korea says it had analyzed the quake and says it is likely to be a 'natural' earthquake.

'An important research method is watching the seismic waves or seismic acoustic waves. The latter may indicate a human-induced earthquake, but this was not the case here. So we can call this a natural earthquake for the moment, 'said a South Korean official.

The earthquake occurred in the area near the Punggye-ri test area in North Korea. Earlier recent bevels in the country were the result of nuclear tests and had a force of at least 4. 3. The last test on September 3 had a magnitude of 6.3.

The International Convention on Prohibition of Nuclear Testing (CTBTO) reports that it has detected two seismic events on Saturday, but it is probably not about human activity.