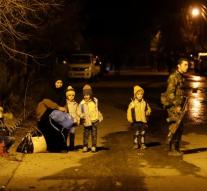 geneve - The United Nations warn of famine in the Syrian city of Deir al-Zor. The western parts of the city have been used since ten months besieged by Islamic State, giving its inhabitants include touch deprived of food.


The UN said Saturday it is now among the 200 000 residents of the city the first deaths by famine. The fighting between IS, government troops and rebels are also the reason that more and more people no longer have electricity.
The United Nations also provide more problems in the city Madaya. Despite help a few days ago by a convoy of trucks with food and drink, the situation remains extremely worrying. Within days, dozens of deceased people to starvation.
NEW