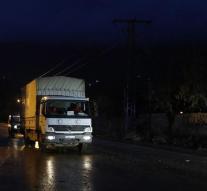 geneve - Around 400,000 people in besieged areas in Syria are in deplorable conditions and need urgent help. This was reported by the Special Envoy of the UN Hilal Elver Tuesday.


They called for an immediate humanitarian pause in the fighting, without conditions, to aid convoys to the places as possible. Monday reached a third convoy of food and fuel some besieged towns in Syria. However, a team of social workers was stopped by armed groups.
,, As the brutal conflict continues in Syria, the situation of those who already live in constant fear of death and bombings, worsened by an impending starvation, '' said the envoy. According to the UN are throughout Syria four million people threatened by famine, but the situation in places where a siege going on acute.
NEW