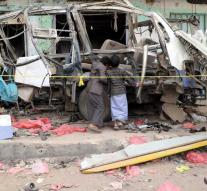 new york - The United Nations Security Council calls for a credible investigation into the bloody air raid that has killed dozens of children in Yemen. That's what Karen Pierce, the British ambassador at the UN, said on Friday.

Pierce said that a senior UN official has informed the 15-member Security Council about the air raid. According to Pierce, members made it clear that they are very concerned about what happened in Yemen. Earlier UN Secretary-General António Guterres insisted on an independent investigation.

The bombing hit a school bus that ran across a market in the Yemeni province of Sa'dah, a Houthi stronghold. According to local authorities, 51 people were killed, including 40 children. Dozens of minors would also have been injured. The Head of Delegation of the International Committee of the Red Cross (ICRC) in Yemen claimed on Twitter that 'the numbers speak for themselves. 'The bloody air attack also led to commotion outside of Yemen. UNICEF director Henrietta Fore talked about a 'low point in the horrendous war. '

The coalition has been fighting for years against the Houthis, who were largely undermining the northwest of the country in 2014. They received, among other things, the capital Sanaa. The Saudis think that the Houthis are backed by arch-rival Iran and the insurgents are bombarding from the air.