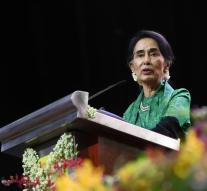 - The United Nations have to visit the Myanmar government leader Aung San Suu Kyi urged the northwest of the country. She must reassure citizens in the border area that they are safe, despite reports that soldiers have raped Rohingya Muslims, civilians killed and houses destroyed.

The army and the Government of Myanmar have denied the allegations. Soldiers were sent to the border with Bangladesh in response to the attack on border posts on October 9, in which nine policemen were slain. Suu Kyi accused the international community of it to disturb the relationship between Buddhists and Muslims.

' The refusal Myamnar to speak out against the hardliners and the choice of a defensive rather than pro-active attitude in favor of the safety of the local population has caused international disappointment, '' said a special adviser to UN-Chef Ban Ki Moon in a statement.