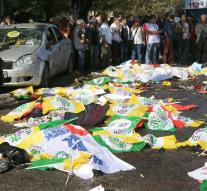 - Secretary-General Ban Ki-moon and the President of the United Nations General Assembly , Mogens Lykketoft , have strongly condemned the attacks in the Turkish capital Ankara. Both also expressed their condolences.

Ban Ki-moon left Sunday through a spokesman that he hopes that the perpetrators are caught and brought to justice quickly. Lykketoft called the attacks a cowardly and senseless act.

He added that people and countries who work for a peaceful, harmonious and sustainable world not wonder should let schrikken. In Ankara arrived Saturday in attacks during a peace demonstration at least 95 people dead, some 250 people were injured