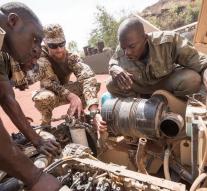 - The United Nations Security Council on Wednesday decided to add additional 2500 soldiers to the MINUSMA peacekeeping force in Mali. The UN wants the force in the African country more,, let act proactively and vigorously. 'The Netherlands since April 2014 will contribute to the UN mission.

UN forces in Mali to 6,000 men operating since July 2013, mainly with the aim of combating the aftermath of a military coup and Tuareg rebels. These nomads in Mali count an estimated 850 000 people. They came in 2012 armed revolt against the regime in the capital Bamako, conquered parts in the north of the country and hold regular bloody attacks.

Mali has over fifteen million inhabitants and is one of the world's poorest countries. It is located south of the Sahara.