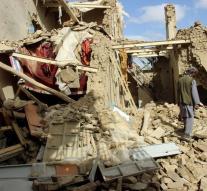 kabul - The United Nations launch an investigation into an air strike which the US has carried out this week in Kunduz Province in Afghanistan. In addition, more than thirty civilians were killed. This has informed the international organization Sunday.

According to the UN fell Thursday 32 civilian deaths and 19 people were injured. It was initially unclear who had carried out the air strike, but acknowledged Saturday the US military figure down.

The action was in support of an Afghan special unit was accompanied by US advisors. They were targeted by the Taliban, which were slain two Americans and three Afghans. Under the Taliban were reported ' many 'dead, but exact figures were missing.