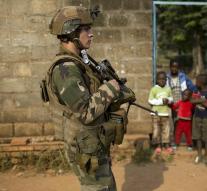 geneve - The United Nations has declared Friday that allegations about soldiers from the UN peacekeeping mission in the Central African Republic which children might have been sexually abused.

These are soldiers from Georgia, France and other countries which are not listed by name.

The crimes, including rape, are said to have committed in 2014. The countries concerned and the European Union are informed by the UN of the facts and investigate the affair itself now. The High Commissioner for Human Rights of the UN, Ra'ad Zeid Al-Hussein, called the accusations,, extremely serious .