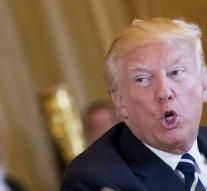 new york - The United Nations can no longer perform essential tasks when US President Donald Trump continues his cuts on support for the people's organization. Trump wants to cut a lot of contributions to the UN and on diplomacy and help abroad in general. He wants to spend about one third less on UN organizations, or about 1 billion euros.

The figures proposed by the Trump government make it 'simply impossible for the UN to continue all its elementary work in promoting peace, development, humanitarian aid and human rights,' said a UN spokesperson. He hopes that Washington can still talk about UN funding.