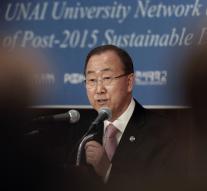 seoul - Secretary-General Ban Ki-moon of the United Nations will this week visit to North Korea. That said a source at the UN against the South Korean news agency Yonhap.

Ban, who hails from South Korea, had earlier this year already planning to travel to the Stalinist country. North Korea then decided without further explanation to call off the visit.

If the visit goes well this time, Man brings also expected to visit the North Korean leader Kim Jong-un. " It is impossible that the Secretary General has not met with the leader of North Korea, a member state of the UN, while he is visiting the country ", said the UN official, told Yonhap.

The planned visit has not been confirmed by the UN.