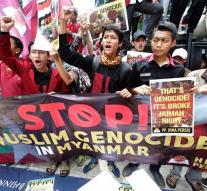 dhaka - Myanmar's army is engaged in a 'collective punishment' of the Muslim minority in the west of the country, 'ethnic cleansing' as the ultimate goal. That accusation voiced strong UN official John McKissick Thursday told the BBC.

To hunt out the so-called Rohingya Muslim country, be shot by the driver in the border region 'men, children massacred, women raped and houses burned and looted. 'McKissick leads a mission of the UN refugee agency, UNHCR, in neighboring Bangladesh. There, thousands of people are going fled because of the violence. China also captures thousands of refugees.

Last month, militants killed in the state of Rakhine nine officers during an attack on border posts. Government forces responded with brute force. According to activists of the Rohingya have been in recent weeks been a hundred deaths.

The government of Myanmar denies any involvement in atrocities. Journalists and aid workers are not allowed in the area.