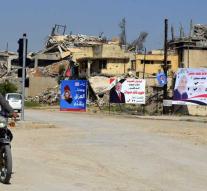 baghdad - So far, 202 mass graves have been discovered in Iraq in areas where Islamic State used to be a service until recently. That is stated in a report from the United Nations that was published on Tuesday. According to American estimates, there are the mortal remains of 6,000 to 12,000 people.

Among the victims are women, children, the elderly and the disabled. In addition, members of the Iraqi armed forces and police have been found. Exact numbers can not yet be given because only 28 mass graves have been opened. Together, 1258 bodies have been excavated.