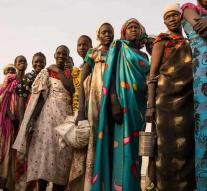 juba - The UN mission in South Sudan started an investigation into widespread rapes around the city of Bentiu. Some 125 women and girls have been raped or assaulted there, confirms the UN mission. Médecins Sans Frontières had previously denounced the massive rapes committed in a ten-day period.

According to victims, the perpetrators were young men, both in military uniforms and in civilian clothes. In the area, according to the UN government troops make the service. To improve safety, blue helmets have been sent to the area.