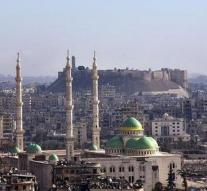 geneva - The United Nations has received permission from the Syrian government to send more observers to eastern Aleppo. Since the twenty UN staff go the evacuation of the rebel enclave monitors, said a spokesman for the organization Tuesday.

'This means that the number of international staff in Aleppo nearly tripled,' said UN spokesman at a press conference in Geneva. 'The task is to monitor and observe the evacuations. '

The employees would otherwise have no 'independent access' to the buses that brought people from eastern Aleppo. 'So we are not able to step in and gain access to people,' said the spokesman.