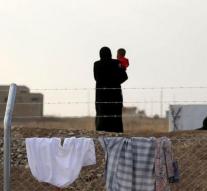 mosul - The terrorist organization Islamic State (IS) has 232 people slain Wednesday in Mosul in northern Iraq. A UN spokeswoman reported Friday that the victims are civilians and former members of Iraqi security forces.

According to the UN spokeswoman refused orders to victims of warriors IS follow.

The terror group would also have been abducted nearly 8,000 families. IS households would in defending Mosul to use as human shields.