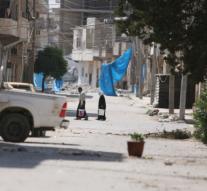 aleppo - The United Nations on Tuesday called for a humanitarian truce in Aleppo. About two million people would sit in the Syrian city without electricity and running water.

Aleppo has been the scene of heavy fighting between government troops and insurgents. The Syrian government army surrounded the northern city mid July. Rebels showed last weekend managed to have broken through the encirclement. Syrian state media spoke against.

The fate of the civilians in the town of concern to the international community. As urged Minister Bert Koenders (Foreign Affairs) last week during international consultations on direct aid to the people who are stuck in Aleppo.


The UN insisted Tuesday the restoration of water and electricity in the city. The infrastructure was last week damaged during fighting.