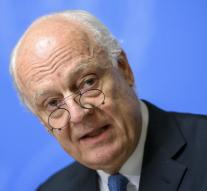 geneve - The special envoy of the UN for Syria, Staffan de Mistura, hoping Friday to begin peace talks with Syria. He said this Monday, the day that the peace talks would be initially launched.

De Mistura thinks Tuesday to send the invitations for the conference in Geneva. He expects there first proximity talks will be, which can take up to six months.