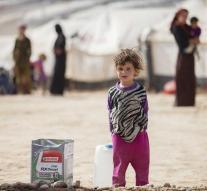 geneva - Islamic State (IS) is still guilty of genocide on Yezidi's.

Just three years ago, IS entered the area around the Sinjar mountain in Iraq, where many Yezidis live. Hundreds of men were slaughtered and women and children had to work as slaves for the terrorist movement. In the expulsion of IS from Iraq, the terrorists took part of their prisoners to the Syrian city of Raqqa.

According to the UN commission, thousands of boys and men are missing and about three thousand women and girls in IS area are exposed to rape and other violence daily. The commission calls on parties to rescue Raqqa de Yezidi's IS-conqueror. The commission also wants the international community to take steps to get the case of the Yezidis in court, for example at the International Criminal Court.