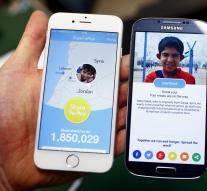 - The World Food Programme of the United Nations Wednesday released an app that it should be easier to donate money for food aid for refugees from Syria. The app Share the Meal donations can be made from 40 cents to 146 euros.

The money is used for the food in the neighboring countries of Syria, including Jordan. The region has about 4 million people captured who have fled the violence in Syria. According to the UN, a child for 40 cents get food all day. Annually, that amounts to 146 euros.

The app Share the Meal made ​​by a German developer, people can quickly deposit money via the payment service PayPal or by credit card. The app is available for iPhones and smartphones with Android. The United Nations hoped the app to collect enough money to 20 000 Syrian children in Jordan for a year of food.