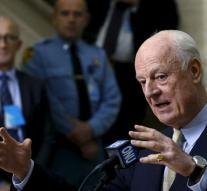 geneve - The major powers should begin negotiations on a cease-fire in Syria. That is not the special envoy of the United Nations Syria envoy Staffan de Mistura said Monday itself.

De Mistura stressed that the so-called International Support Group for Syria (ISSG) has agreed to consider ceasefires in Syria. Including the United States, Russia, Iran, Turkey and some Gulf States and European countries are part of the ISSG. The UN envoy said he would focus on the task that the UN have given him: finding a political solution for Syria.

The HNC sets as a condition for its participation in the peace agreement that put an end to the bombing of civilians and the siege of some cities and towns. The lack of progress on these points, the HNC delegation departs from Geneva, she has said.