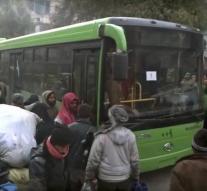 paris - A repeat of the bloody siege of Aleppo threatens to take place in the city of Idlib and not a cease-fire is agreed quickly. That insistent warning uttered UN envoy to Syria Staffan de Mistura Thursday night after consultations with the French government in Paris.

Idlib is located 55 kilometers southwest of Aleppo. Both the city and the province is currently in the hands of rebels, including jihadist groups. The area is the final destination for thousands of civilians and fighters who may depart from eastern Aleppo. A massive evacuation from the former rebel stronghold, which after months of siege, fell into the hands of government forces and their allies, began Thursday.

De Mistura said that the UN does not have enough observers on the ground to oversee the evacuation. To the east of Aleppo, according to him still around 50 000 people. The majority, about 40 000 citizens, is going according to the UN envoy to the west side of the city. The others, warriors and their families, go to Idlib.

It is high time that the war stops and is being negotiated, said the diplomat.

The US Secretary of State John Kerry called for rapid peace negotiations. He accused the Syrian regime that it was 'nothing short of a massacre' has caused in Aleppo. The Syrian government frustrates according Kerry a nationwide ceasefire 'by failing to keep appointments. 'He called on the Syrian government and the Russian army to' make the strategic choice of peace. '