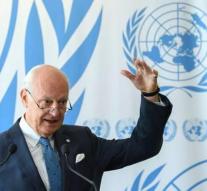 geneva - The Syrian opposition must, according to UN ambassador Staffan de Mistura, be based on the fact that they have not won the civil war. He wondered aloud whether 'the opposition is able to be realistic and united enough' to realize that.

The diplomat emphasized that in his eyes, 'no one at this time can claim to win the war'. The conflict in Syria has been going on for six years and the battle is still in progress. Meanwhile, terrorist group seems to be defeating Islamic State (IS) on defeat.

The Mistura recently predicted that the last civilizations in Syria of the terrorist group were likely to fall by the end of October. He called on President Bashar al-Assad to make a 'gesture' to the Syrian population by exposing credible elections in the long term.