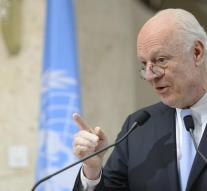 - UN envoy to Syria Staffan de Mistura expects the planned peace talks next week will gradually start. Some delegations arrive on March 9, another because of problems with reservations probably one or more days later. The negotiations will be conducted indirectly and the parties De Mistura will not be in the same room with each other to said table, in an interview with the Arab newspaper Al Hayat.

The peace council would initially take place in January, but it was well and truly started again aborted. De Mistura hopes that conditions are better now that a limited cease-fire is in effect.

De Mistura said he wants members of the government, the opposition, civil society groups and women to invite to the meeting.,, Women are important to us because they tell us a lot about the future of Syria. We will talk separately with them. '