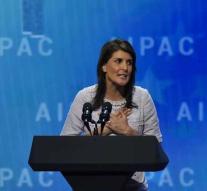 new york - Among the sixty Russians that Washington expels, twelve Russian diplomats are with the United Nations. The US government accuses the UN diplomats of doing intelligence work.

'Here in New York, Russia uses the United Nations as a safe haven for dangerous activities within our borders,' said US UN ambassador Nikki Haley.

Earlier Monday, Washington had reported that it deferred 60 diplomats. The Russian consulate in Seattle must also close its doors. The measure is a reaction to the assassination attempt with poison in England on a Russian ex-spy, Sergei Skripal, and his daughter. According to Britain and a number of allies, Moscow is responsible for the poisoning.