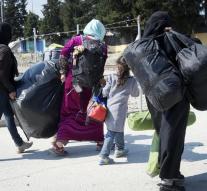 geneva - Worldwide there are for the first time more than 60 million refugees as a result of armed conflict and persecution. That leaves the UN refugee agency (UNHCR) said in a report released Monday by figures for 2015.

UNHCR called a,, sad record, 'the 65.3 million displaced persons, refugees and asylum seekers, which the organization had last year. 40.8 million people by the end of 2015 internally displaced, 21.3 million people sought refuge elsewhere waited and 3.2 million abroad on their asylum application.

The High Commissioner announced that while the dangers of refugees routes have been reproduced for Refugees Filippo Grandi. At sea,, lose shockingly many people their lives. The land route was blocked by closed borders and political vote against asylum made in some countries. ''