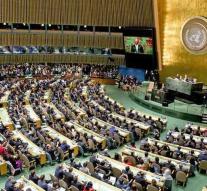 new york - The United Nations General Assembly condemns Israel for the use of excessive force against Palestinian civilians. UN Secretary-General António Guterres was asked to recommend an 'international protection mechanism' for the occupied Palestinian territories.

The General Assembly adopted a resolution with 120 votes in favor and eight against. 45 countries abstained from voting. The resolution had been tabled by Algeria, Turkey and Palestine. Earlier this month, a similar resolution in the UN Security Council was stopped with a veto from the United States.

More than 120 Palestinians have been killed since 30 March as a result of the violence of Israeli troops in border protests in Gaza. The largest number of deaths occurred on May 14, the day the United States moved their embassy from Tel Aviv to Jerusalem.