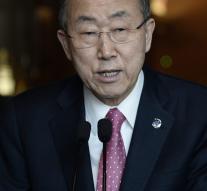 baghdad - Secretary-General Ban Ki-moon of the United Nations has condemned Monday Iran because of the execution of two minors last week. The South Korean expressed his concern about the increased number of executions in the Islamic country . This year performed more than seven hundred death sentences , of which at least forty in public. That's the highest number in twelve years.

Ban Ki-moon pointed out that Iran has signed agreements stating that the death penalty can not be imposed on persons below eighteen years. According to the UN, most punishments were imposed for drug-related offenses.

The UN calls on Iran to suspend capital punishment by directly and to buy it eventually completely. Human Rights Watch has seen no improvement since 2013 in the human rights situation in Iran.