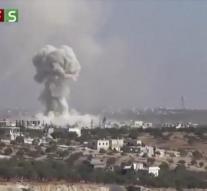 - Secretary-General Ban Ki-moon of the United Nations wants as soon as possible an independent investigation into an attack on a school in northwestern Syria, which certainly have fallen 35 deaths. The attack 'was likely a war crime,' he said.

When the bombing Wednesday came according to UNICEF, 22 students and six teachers were killed. It was possibly the deadliest attack on a school in Syria since the start of the civil war, more than five years ago.

UN chief Ban said continue to place such atrocities 'because those responsible, whether they share on the side of the regime or those of the rebels, fearing no justice. '

The Syrian opposition, France and the United States put the regime or Russia responsible for the attack on the school. Russia denies any involvement of the hand.