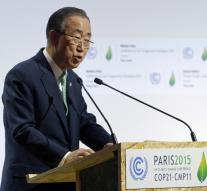 - Secretary-General Ban Ki-moon of the United Nations called on Monday at the start of the climate summit in Paris to collaboration and flexibility. " A political moment like this may not come again," he said in a speech.

According to Ban, the conference will have on the global warming cause a " clear message " with the long-term goal to limit global warming to a maximum 2 degrees.

During the climate negotiations representatives from 195 countries, nearly two weeks on greenhouse gas emissions and global warming. Ban and French President Francois Hollande welcomed earlier in the day about 150 heads of state.