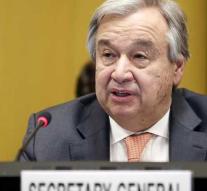 geneva - UN chief António Guterres is working on new plans to eliminate chemical and nuclear weapons. Guterres said this at an international conference on global disarmament in Geneva. He warned against the misconception of some countries that nuclear weapons make the world safer.

He is also concerned about the elimination of restraint with regard to carrying out tests with nuclear and chemical weapons. He also said he wanted to take action against the spread of a new generation of technological weapons.