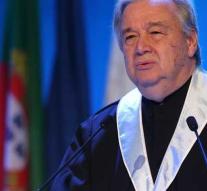 lisbon - The Secretary-General of the United Nations calls for international agreements on digital warfare between countries. According to UN boss António Guterres, it is unclear whether existing treaties have anything to say about such conflicts.

Guterres said during a speech in Lisbon, convinced that the next war does not start with 'artillery bombardments or air strikes', but with 'a huge cyber attack. 'According to the UN boss, it is probably not only directed against military targets, but can also, for example, shut down the electricity supply.

The Secretary-General stated that the United Nations can help with discussions between stakeholders, such as scientists and governments. They should draw up rules that ensure that conflicts in which information technology plays a role are given a 'more humane character'.