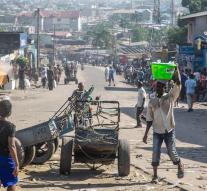 kinshasa - The Congolese army killed in April 164 civilians, including 45 children and seven women. This is evidenced by data from the UN mission in the country announced Wednesday.

The victims fell in the central region of Kasai. It has been fighting for months between rebels and government forces. The rebels of Kamwina Nsapu are held responsible for the death of another 28 people.