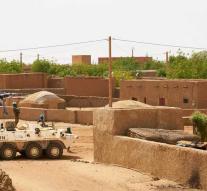 bamako - Malian soldiers who were involved in the fight against Islamist militants have executed twelve civilians at a livestock market in the southern city of Boulkessy without any form of trial. The UN mission Minusma reported that this has been shown by research.

Minusma began an investigation after reports that Malian troops had killed civilians. According to the UN mission, the Malian soldiers have resorted to the executions as revenge for a soldier who was killed by an attack. Minusma gave the results of the investigation to the Malian government.

Mali was overrun by jihadists in 2012. They had to give back ground afterwards, but they have not yet been definitively defeated. The United Nations is trying with Minusma to restore security and stability in the West African country. The Netherlands has been contributing to the mission since April 2014 and will continue to do so until the end of 2018.